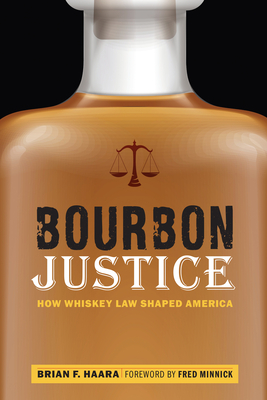 Bourbon whiskey has made a surprising contribution to American legal history. Tracking the history of bourbon and bourbon law illuminates the development of the United States as a nation, from conquering the wild frontier to rugged individualism to fostering the entrepreneurial spirit to solidifying itself as a nation of laws. Bourbon is responsible for the growth and maturation of many substantive areas of the law, such as trademark, breach of contract, fraud, governmental regulation and taxation, and consumer protection. In Bourbon Justice Brian Haara delves into the legal history behind one of America’s most treasured spirits to uncover a past fraught with lawsuits whose outcome, surprisingly perhaps, helped define a nation.

Approaching the history of bourbon from a legal standpoint, Haara tells the history of America through the development of commercial laws that guided our nation from an often reckless laissez-faire mentality, through the growing pains of industrialization, and past the overcorrection of Prohibition. More than just true bourbon history, this is part of the American story.

Brian Haara is a public speaker and legal writer, and he practices law as co-managing partner of Tachau Meek PLC, a business litigation firm. He writes about bourbon history and law on his blog Sipp’n Corn and was featured in the documentary Straight Up: Kentucky Bourbon.

Wall Street Journal best-selling author Fred Minnick, once an army journalist in Iraq, writes the award-winning American Whiskey column for Tasting Panel Magazine and Toasting the Hunt column for Covey Rise. A regular contributor to Caviar Affair, Costco Connection, Whisky Magazine, and Whisky Advocate, Minnick has written widely about the spirits industry, traveling around the world covering everything from Limoncello in Sorrento, Italy, to Malbec wine in Mendoza, Argentina. Minnick is a member of the Author’s Guild and the American Society of Journalists and Authors. Meridith May, publisher of Tasting Panel, calls Minnick “one of the best whiskey storytellers in the business.”

"This book tracks the history of bourbon and bourbon law and uses it as the base for growth of the United States as a nation. Beginning in the frontier through the restless entrepreneurial boon of the spirit, bourbon is responsible for many areas of law, such as trademark, breach of contract, fraud, governmental regulation and taxation, and consumer protection. More than just the history of a spirit, Bourbon Justice tells a part of the larger American story."—New Worlder
— New Worlder

"You've certainly read about landmark bourbon citations including the Bottled-In-Bond Act, the Taft Decision and others. But nobody until now has put them in their rightful historical context. Haara's crowning achievement with Bourbon Justice is to emphasize bourbon's true impact on the future of American business."—Brett Atlas, Bourbon and Banter
— Brett Atlas

"Brian Haara tells us the fascinating story of how many very litigious bourbon folks ended up, often accidentally, crafting a new and different American commercial society that is still with us today. Lawsuits that started with bourbon ended up affecting industries as far reaching as women's lingerie and mouthwash."—Eric Burke, Bourbon Guy
— Eric Burke

"Bourbon Justice follows the growth of bourbon whiskey through the lawsuits that shaped it, but also conversely addresses how bourbon, one of America's first "branded" products, shaped American law. . . This is not just another "Bourbon 101" book, it's for those who really crave knowledge about how bourbon "grew up" with America and is inexorably intertwined with our legal system today. . . . This book is the authority on how bourbon law shaped America."—Bill Straub, Modern Thirst
— Bill Straub

"Bourbon Justice is a very revealing book. It tracks the history of bourbon and how it shaped America's commercial law. . . . Haara dusted the old dusty lawsuits and brought out our untold story buried in those lawsuits and shelved safely away from public eyes. He gives a new and fresh perspective to look at the history of the United States and bourbon. This brilliantly-written history book is written for both historians and laypeople. Haara has made reading law and history enjoyable."—Washington Book Review
— Washington Book Review

"Haara draws on many examples and stories to provide a narrative both educational and entertaining. Highlights include the Bottled-in-Bond Act of 1897 (the first instance of federal consumer protection legislation); the 1936 case of Churchill Downs Distilling Co v. Churchill Downs Inc., which established rights to protect trademarks against use by others in different industries; and more recent litigation involving the Maker's Mark red-dripping-wax seal. . . . If you are a fan of legal history (or a fan of bourbon), I recommend this book."—Chris Liro, Wisconsin Lawyer
— Chris Liro

"This admirable book will be a valuable addition for any whiskey enthusiast, but it will also be a fine read for anyone with a serious interest in American history."—Susan Reigler, Leo Weekly
— Susan Reigler

"A fun read for those who like bourbon, justice, American history, or American legal history."—Charles Dresow, MCBA
— Charles Dresow

"This book certainly belongs in every American law library. However, this work goes well beyond the law; the story of Bourbon is the story of America’s history. Any reader with an interest in our past will enjoy this excellent book about a wonderful beverage that has had an important effect on our nation."—Mark W. Podvia, CLCJ Books
— Mark W. Podvia

"Bourbon Justice is a must-have book for any Bourbon library. I would also recommend it as reading for anyone thinking about opening a distillery. It will help them understand why laws were made and why they should follow the regulation in branding their products."—Bourbon Veach
— Bourbon Veach

"If you carry the bourbon dork badge with pride, this book should definitely be on your shelf."—Drew Beard, Drinkhacker
— Drew Beard

"For readers who might be hesitant to dive into a book of legal history, Haara makes the topic entertaining and approachable. He also includes tasting notes for selected bourbons. The suggestion to read and talk about the book in the company of bourbon is well taken. This book will appeal to general audiences, legal historians, and those with an interest in bourbon history."—Aaron D. Purcell, Historian
— Aaron D. Purcell

“Bourbon Justice uses a groundbreaking approach to tell the history of the bourbon industry—the lawsuits that provide the true origin stories of famous brands. I believe this book will quickly become a classic work in the field of bourbon history and of distilled spirits as a whole.”—Michael Veach, bourbon historian, scholar, and author of Kentucky Bourbon Whiskey: An American Heritage
— Michael Veach

“The subtle, dry wit of Haara’s book makes a crisp argument. It turns out that dusty lawsuits are a perfect way to explore the heritage of both our nation and its spirit.”—Reid Mitenbuler, author of Bourbon Empire: The Past and Future of America’s Whiskey
— Reid Mitenbuler