Me & Patsy Kickin' Up Dust: My Friendship with Patsy Cline (CD-Audio) 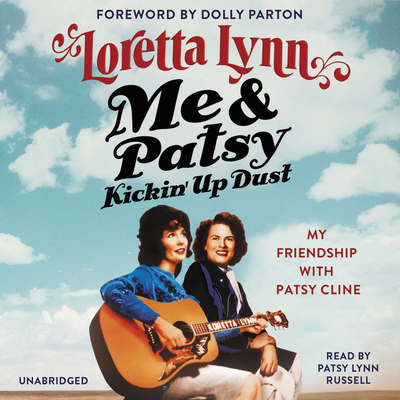 Me & Patsy Kickin' Up Dust shares the"important and inspiring" (Miranda Lambert) never-before-told complete story of the remarkable relationship between country music icons Patsy Cline and Loretta Lynn.
Loretta Lynn and the late Patsy Cline are legends--country icons and sisters of the heart. For the first time ever Loretta tells their story: a celebration of their music and their relationship up until Patsy's tragic and untimely death.

Full of laughter and tears, this eye-opening, heartwarming memoir paints a picture of two stubborn, spirited country gals who'd be damned if they'd let men or convention tell them how to be. Set in the heady streets of the 1960s South, this nostalgia ride shows how Nashville blossomed into the city of music it is today. Tender and fierce, Me & Patsy Kickin' Up Dust is an up-close-and-personal portrait of a friendship that defined a generation and changed country music indelibly--and a meditation on love, loss and legacy.

Loretta Lynn is an American country music singer-songwriter whose groundbreaking career spans almost 60 years, with such famous hits as "You Ain't Woman Enough (To Take My Man)" and "Coal Miner's Daughter," as well as a biographic film New York Times bestselling book of the same name. With more than 45 million albums sold worldwide, multiple gold albums, and numerous awards and accolades, Loretta is the most awarded female country recording artist and the only female ACM Artist of the Decade. She's known not only for her still-incredible voice, but also for her down-to-earth quality, quick wit, and humor.

"Loretta and Patsy had a bond that set the standard for ladies in music today. They taught us to support each other and to life each other up. I have been in a band with two other women (Pistol Annies) for almost a decade, so I understand that sisterhood more than ever. It's important and inspiring."
—Miranda Lambert

"I've always admired the friendship that Loretta and Patsy had. Two "girl singers" breaking ground and changing the times for women in country music together. They got it right. Instead of sizing each other up as competition, they became allies and friends. They paved the way for the rest of us."
—Trisha Yearwood

"Patsy and Loretta are two women who can teach us so much about life, especially how to stand up for yourself and how to deal with being a woman in the world of Country Music today because they had to do it in THEIR day. The biggest difference is, these days, we have huge numbers to face that situation together. They didn't have that security. They fought for it. They came together when they both needed a friend most, and reading this book makes you want to have that same bond with a friend. I think they would encourage you, the reader, to find that special friend in your life. Priceless."
—Reba McEntire

"Lynn reveals her sincere, heartfelt emotions throughout the narrative, giving readers a true sense of the depths of their friendship as well as the haunting pain of Cline's death. A touching memoir filled with the emotional highs and lows of a deep bond."
—Kirkus

"Lynn's fans will absolutely adore this as much for her typical no-holds-barred style as for her country warmth and the loving description of a deeply missed friendship."
—Booklist (starred review)

"Lynn, with her daughter Patsy, has written a beautiful, heartbreaking valentine to Cline, who was a mentor and passionate and devoted friend-all of which is manifestly conveyed through Lynn's uniquely distinct eastern Kentucky voice and seemingly endless cascade of stories."
—Library Journal (starred review)

"[In] Me & Patsy Kickin' Up Dust, Loretta chronicles her friendship with Patsy before her tragic passing in 1963. And fans of her classic 1976 memoir, Coal Miner's Daughter, know that nobody tells a story quite like Loretta Lynn."—Southern Living

"Even if Patsy Cline and Loretta Lynn weren't two of the most influential artists in country music, this story about the bond between them as they rose to the top of their fields would be a touching meditation on friendship, loyalty, and loss. But playing out against the rise of Nashville and the price of fame, it becomes something even more absorbing."
—Town & Country

"Lynn is, above all, a great storyteller, and this book is filled with warm and funny stories, as heartfelt and true as any of her songs. But underneath the folksy veneer is an unvarnished view of what it took for her and Cline to make it to the top."
—Associated Press

"With an outstanding Foreword by Dolly Parton, Me & Patsy Kickin' Up Dust delivers enjoyable short chapters jumping in and out of stories from Loretta Lynn's heart, written in Loretta's own, unedited, authentic, rural mountain voice."—New York Journal of Books

"[A] quick and illuminating read. . . [Loretta Lynn] offers a heartfelt and often rollicking remembrance of her friendship with the late Patsy Cline."
—The Wall Street Journal

"[A] heartfelt appreciation of how one great singing star lent her hard-won wisdom to another."
—USA Today