The Bourbon Bartender: 50 Cocktails to Celebrate the American Spirit (Hardcover) 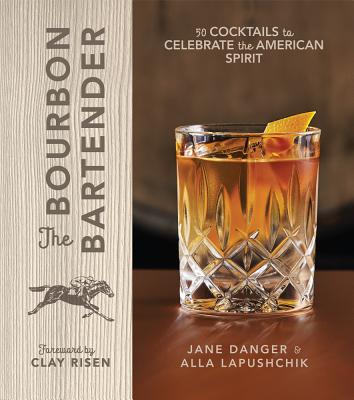 Raise your glass to the bourbon renaissance with this must-have cocktail collection.
Made in America and aged in charred new American oak barrels, bourbon is the quintessential US spirit--but the best part is mixing it up into tasty drinks. Here are the best of the best. Whiskey experts Jane Danger and Alla Lapushchik offer timeless classics and forgotten gems, such as the Old Fashioned and the Boulevardier, as well as cutting-edge craft concoctions, including the Brown Derby and Paper Plane. They also serve up a short history of bourbon, tips for making delicious infusions and syrups, sidebars chronicling bourbon's influence on American culture, short profiles of the country's best bourbon-focused bars, and a calendar of bourbon festivals and events--everything a bourbon lover could want.

Alla Lapushchik is coauthor of Cuban Cocktails: 100 Classic and Modern Drinks (Sterling Epicure). She assisted with the opening of the Bourgeois Pig while studying at New York University before moving to Mayahuel, Death & Co., Desnuda Cevicheria, and 124 Rabbit Club. After opening Post Office Whiskey Bar in South Williamsburg, she opened OTB, which focuses on craft spirits and comfort food. Time Out New York included her among "Brooklyn's New Order," and she has been featured in Brooklyn Spirits by Peter Thomas Fontanale and Chris Wertz, Imbibe magazine, The New York Times, and Village Voice. She lives in Brooklyn. Jane Danger is coauthor of Cuban Cocktails: 100 Classic and Modern Drinks (Sterling Epicure) and began her bartending career at CBGB before moving to Death & Co. and then PDT. She also worked at Little Branch and Dutch Kills before opening Cienfuegos and moving to Nomad Bar. She consults on and contributes to cocktail menus all along the East Coast, and her work has appeared in Food and Wine, Imbibe, New York Magazine, Time Out New York, New York Post, The New York Times, The PDT Cocktail Book, and Mr. Boston 75th Anniversary Guide, and on popular TV cooking shows. She lives in New York City. Clay Risen is a senior editor at The New York Times and the drinks columnist for Garden & Gun. He has also written for The Atlantic, Fortune, Smithsonian, and the Washington Post and is the author of A Nation on Fire: America in the Wake of the King Assassination and The Bill of the Century: The Epic Battle for the Civil Rights Act. Risen grew up in Nashville, TN, and lives in Brooklyn, NY, with his wife and two young children.