A Good Neighborhood: A Novel (Paperback) 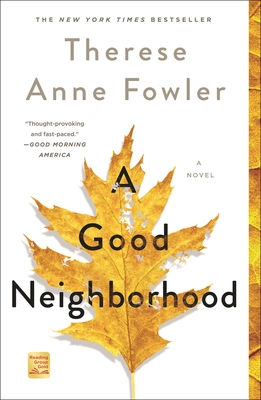 By Therese Anne Fowler
$16.99
Not Yet Published

“Therese Anne Fowler’s new novel will have you examining the actions and motivations of everyone you know. Her exquisite storytelling and character development deliver an unforgettable and unpredictable story that touches on many contemporary issues, including race, wealth, control, and status. Be sure to leave yourself some time for this one — once you hit the tipping point, you won’t put it down until you finish.”
— Kari Erpenbach, University Of Minnesota Bookstores, Minneapolis, MN

“A feast of a read... I finished A Good Neighborhood in a single sitting. Yes, it’s that good.” —Jodi Picoult, #1 New York Times bestselling author of Small Great Things and A Spark of Light

In Oak Knoll, a verdant, tight-knit North Carolina neighborhood, professor of forestry and ecology Valerie Alston-Holt is raising her bright and talented biracial son, Xavier, who’s headed to college in the fall. All is well until the Whitmans—a family with new money and a secretly troubled teenage daughter—raze the house and trees next door to build themselves a showplace.

With little in common except a property line, these two families quickly find themselves at odds: first, over an historic oak tree in Valerie's yard, and soon after, the blossoming romance between their two teenagers.

A Good Neighborhood asks big questions about life in America today—what does it mean to be a good neighbor? How do we live alongside each other when we don't see eye to eye?—as it explores the effects of class, race, and heartrending love in a story that’s as provocative as it is powerful.

THERESE ANNE FOWLER is the author of the New York Times bestselling novel Z: A Novel of Zelda Fitzgerald. Raised in the Midwest, she migrated to North Carolina in 1995. She holds a B.A. in sociology/cultural anthropology and an MFA in creative writing from North Carolina State University.

"Fowler has crafted one of the most precise and timely novels of the year. The daughter of a local businessman starts dating the biracial son of a professor in a leafy North Carolina suburb, boiling toward an inevitable and wrenching conclusion."--Newsweek

"Riveting...Fowler empathetically conjures nuanced characters we won't soon forget, expertly weaves together their stories, and imbues the plot with a sense of inevitability and urgency. In the end, she offers an opportunity for catharsis as well as a heartfelt, hopeful call to action.Traversing topics of love, race, and class, this emotionally complex novel speaks to—and may reverberate beyond—our troubled times." —Kirkus, on A Good Neighborhood (starred review)

"Fowler's fascinating plot is skillfully executed, delving into each character's complexities fully enough that their choices make perfect sense. This page-turner delivers a thoughtful exploration of prejudice, preconceived notions, and what it means to be innocent." — Publisher's Weekly

"A rippling story for fans of suspenseful domestic dramas" — Booklist

“Therese Anne Fowler has..concocted a feast of a read: compelling, heartbreaking, and inevitable. I finished A Good Neighborhood in a single sitting. Yes, it’s that good.” —Jodi Picoult, #1 New York Times bestselling author of Small Great Things and A Spark of Light

"Compelling and captivating, A Good Neighborhood left me speechless yet wanting to discuss. This is a story that will stick with you for a long time." —Emily Giffin, #1 New York Times bestselling author of All We Ever Wanted

"A provocative, timely page-turner about the crucial issues of our time. I gulped it down, and the stunning conclusion left me both heartbroken and hopeful.” —Meg Waite Clayton, New York Times bestselling author of The Last Train to London

"A gripping modern morality tale...Familiar elements - two families, two young lovers, a legal dispute - frame a story that feels both classic and inevitable. But Fowler makes the book her own with smart dialogue, compelling characters and a communal “we” narrator that implicates us all in the wrenching conclusion." —Tara Conklin, New York Times bestselling author of The Last Romantics

"A Good Neighborhood is my favorite kind of novel — compelling, complicated, timely, and smart. With great humanity, Therese Anne Fowler imparts a full-hearted, unflinching indictment of a broken system and in so doing tells a story hard to put down and hard to forget." —Laurie Frankel, bestselling author of This is How it Always Is

"Nothing short of mesmerizing." —Kirkus, on A Well-Behaved Woman (starred review)