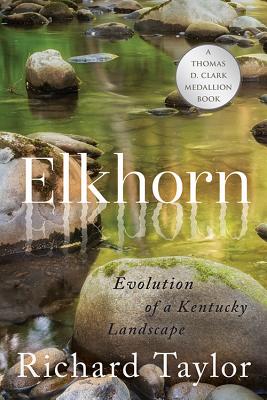 When former Kentucky Poet Laureate Richard Taylor took a job at Kentucky State University in 1975, he purchased a fixer-upper -- in need of a roof, a paint job, city water, and central heating -- that became known to his friends as "Taylor's Folly." The historic Giltner-Holt House, which was built in 1859 and sits close by the Elkhorn Creek a few miles outside of Frankfort, became the poet's entrance into the area's history and culture, and the Elkhorn became a source of inspiration for his writing.

Driven by topophilia (love of place), Taylor focuses on the eight-mile stretch of the creek from the Forks of the Elkhorn to Knight's Bridge to provide a glimpse into the economic, social, and cultural transformation of Kentucky from wilderness to its current landscape. He explores both the natural history of the region and the formation of the Forks community. Taylor recounts the Elkhorn Valley's inhabitants from the earliest surveyors and settlers to artist Paul Sawyier, who memorably documented the creek in watercolors, oils, and pastels. Interspersed with photographs and illustrations -- contemporary and historic -- and intermixed with short vignettes about historical figures of the region, Elkhorn: Evolution of a Kentucky Landscape delivers a history that is by turns a vibrant and meditative personal response to the creek and its many wonders.

Flowing across four counties in central Kentucky, Elkhorn Creek is the second largest tributary of the Kentucky River. Known for its beauty and recreational opportunities, Elkhorn Creek has become an increasingly popular location for canoeing, kayaking, and camping and is one of the state's best-known streams for smallmouth bass, bluegills, and crawfish. Like Walden Pond for Henry David Thoreau, the Elkhorn has been a touchstone for Taylor. A beautiful blend of creative storytelling and historical exploration of one of the state's beloved waterways, Elkhorn celebrates a gem in the heart of central Kentucky.

Richard Taylor is professor of English and Kenan Visiting Writer at Transylvania University and former Poet Laureate of Kentucky. Taylor has written numereous books, including Sue Mundy: A Novel of the Civil War; Girty; and Earth Bones.