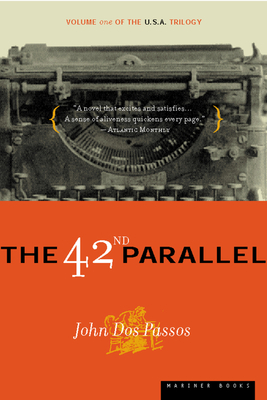 The first in John Dos Passos's acclaimed USA trilogy—a “linguistically adventurous national portrait for a precarious age—his, and ours” (The New Yorker).

John Dos Passos's USA trilogy (comprising The 42nd Parallel, 1919, and The Big Money), named one of the best books of the twentieth century by the Modern Library, is a grand, kaleidoscopic portrait of a nation, buzzing with history and life on every page.

Told in stories and "newsreels" consisting of front-page headlines and article fragments from the Chicago Tribune, the lives and fortunes of five characters unfold. Mac, Janey, Eleanor, Ward, and Charley are caught on the storm track of this parallel and blown New Yorkward. As their lives cross and double back again, the likes of Eugene Debs, Thomas Edison, and Andrew Carnegie make appearances.

While Fitzgerald and Hemingway were cultivating what Edmund Wilson once called their "own little corners," John Dos Passos was taking on the world.

John Dos Passos (1896-1970), a member of the Lost Generation, was the author of more than forty works of fiction and nonfiction, including THREE SOLDIERS and MANHATTAN TRANSFER.

"The single greatest novel any of us have written, yes, in this country in the last one hundred years." -- Norman Mailer —