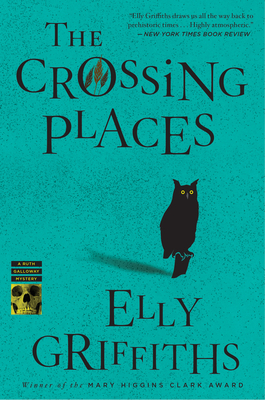 “The fascinating, isolated area of England called The Saltmarsh is an ideal location for middle-age forensic anthropologist Ruth Galloway to discover a child's bones, which begins this mystery. The characters in The Crossing Places are terrific, all unique and darkly sinister enough to keep readers involved in an engrossing story. An excellent first mystery!”
— Susan Wasson, Bookworks, Albuquerque, NM

The first entry in the acclaimed Ruth Galloway series follows the "captivating"* archaeologist as she investigates a child's bones found on a nearby beach, thought to be the remains of a little girl who went missing ten years before.

Forensic archeologist Dr. Ruth Galloway is in her late thirties. She lives happily alone with her two cats in a bleak, remote area near Norfolk, land that was sacred to its Iron Age inhabitants—not quite earth, not quite sea. But her routine days of digging up bones and other ancient objects are harshly upended when a child’s bones are found on a desolate beach. Detective Chief Inspector Nelson calls Galloway for help, believing they are the remains of Lucy Downey, a little girl who went missing a decade ago and whose abductor continues to taunt him with bizarre letters containing references to ritual sacrifice, Shakespeare, and the Bible. Then a second girl goes missing and Nelson receives a new letter—exactly like the ones about Lucy.

Is it the same killer? Or a copycat murderer, linked in some way to the site near Ruth’s remote home?

ELLY GRIFFITHS is the author of the Ruth Galloway and Brighton mystery series, as well as the standalone novels The Stranger Diaries, winner of the Edgar Award for Best Novel, and The Postscript Murders. She is the recipient of the CWA Dagger in the Library Award and the Mary Higgins Clark Award. She lives in Brighton, England.

The Saltmarsh, a mystical place, provides the stunning backdrop for a new mystery series.Ruth Galloway is an overweight 40-ish forensic archaeologist living happily and quietly with her two cats in a Saltmarsh cottage when DCI Harry Nelson calls on her to establish the age of some bones found on a lonely beach. Nelson has never given up the search for Lucy Downey, taken from her parents’ home 10 years ago and presumed dead. But these bones, to Ruth’s delight, are those of an Iron Age child ritually buried. Despite their disparate backgrounds, the tough cop is sufficiently impressed by Ruth’s calm professionalism to show her a series of taunting letters he’s received over the years, presumably from the killer. She’s struck by the use of biblical and literary quotations and some arcane archaeological knowledge. The Iron Age find brings interest from both the university where Ruth teaches and her former mentor Erik Anderssen. The dig they worked together at the Saltmarsh now provides a shoal of suspects for Nelson. Reputed magician Cathbad, Ruth’s former lover Peter, her friend Shona and Erik were all around at the time. When one of Ruth’s cats is killed and left on her doorstep and another child goes missing, she’s sucked even deeper into the challenging and terrifying hunt for the truth.A winning debut. Aficionados may guess the killer early on, but the first-rate characters and chilling story are entrancing from start to finish. - Kirkus Reviews   Issue: November 15, 2009 The Crossing Places. Griffiths, Elly (Author) Jan 2010. 304 p. Houghton, hardcover, $25.00. (9780547229898). Nearing 40 and overweight, forensic anthropologist Ruth Galloway is content with her life, teaching at the University of North Norfolk and living in a cottage on remote Saltmarsh with her two cats. When DCI Harry Nelson enlists her help in identifying the bones of a child unearthed in the marsh, he anticipates closing the case of five-year-old Lucy Downey, snatched from her bed 10 years earlier. But Ruth confirms that the bones date from the Iron Age, an exciting find that recalls memories of a dig led by her mentor, Erik, at which she met her former lover, Peter. Impressed with Ruth, Nelson shares his file on the missing child and calls on her when another little girl goes missing, putting Ruth herself at risk. Griffiths combines elements of archaeology, mythology, and even ornithology with the foreboding mood of the marsh. The result is an atmospheric mystery with a pulse-pounding climax and starring an oh-so-human protagonist who deals with life realistically. A knockout start for a series that should have broad appeal across the crime genre, from thriller fans to lovers of slightly edgy cozies. — Michele Leber (Booklist)   Dr. Ruth Galloway lives on the remote English beach of Saltmarsh and teaches archeology at a small local university. When a child's bones are found on a beach nearby, DCI Harry Nelson calls Galloway for help. He thinks they may be those of a missing child from a ten-year-old cold case that involved bizarre letters mentioning rituals and sacrifices. But the bones turn out to be nearly 2000 years old. Then another child vanishes, and Galloway stays on the case. More letters turn up, and these pull Galloway deeper into the hunt and into real danger. VERDICT Crime solving and anthropology have gone hand in hand through other successful mystery series such as those by Erin Hart and Aaron Elkins; Griffiths's debut stands well with them. Both Nelson and Galloway are captivating characters, and Griffiths's story is strong, well plotted, and suspenseful, leaving the reader eager for more adventures on the windswept Norfolk coast. Highly recommended.Ã¢â‚¬â€Sus —