She's Not There: A Life in Two Genders (Paperback) 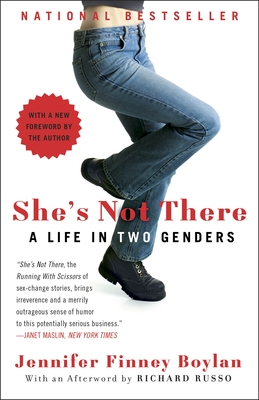 The bestselling, seminal work of trans literature: a story of love, sex, selfhood, and understanding from Jennifer Finney Boylan

When she changed genders, she changed the world.  It was the groundbreaking publication of She’s Not There in 2003 that jump-started the transgender revolution. By turns hilarious and deeply moving, Boylan – a cast member on I Am Cait; an advisor to the television series Transparent, and a contributing opinion writer for the New York Times -- explores the territory that lies between men and women, examines changing friendships, and rejoices in the redeeming power of love and family.

She’s Not There was one of the first works to present trans experience from the perspective of a literary novelist, opening a door to new understanding of love, sex, gender, and identity.  Boylan inspired readers to ask the same questions she asked herself:  What is it that makes us---ourselves?  What does it mean to be a man, or a woman?  How much could my husband, or wife, change—and still be recognizable as the one I love?

Boylan’s humorous, wise voice helped make She’s Not There the first bestselling work by a transgender American--and transformed Boylan into a national spokeswoman for LGBTQ people, their families, and the people that love them.  This updated and revised edition also includes a new epilogue from Jenny’s wife Grace; it also contains the original afterward by her friend, novelist and Pulitzer Prize winner Richard Russo.

“Love will prevail,” said Boylan’s conservative mother, as she learned about her daughter’s identity. She’s Not There is the story that helped bring about a world in which that change seems almost possible.

JENNIFER FINNEY BOYLAN, author of fourteen books, is the inaugural Anna Quindlen Writer in Residence at Barnard College of Columbia University in the City of New York and is Special Advisor to the president of Colby College in Maine. She has been a contributor to the Op-Ed page of the New York Times since 2007; in 2013 she became Contributing Opinion Writer for the page. Jenny also serves on the Board of Trustees of the Kinsey Institute for Research on Sex, Gender, and Reproduction. She is the national co-chair of the Board of Directors of GLAAD, the media advocacy group for LGBT people worldwide, and serves as a consultant to several television series. A novelist, memoirist, and short-story writer, she is also a nationally known advocate for civil rights. Jenny has appeared on the Oprah Winfrey Show on four occasions; Live with Larry King twice; the Today show; the Barbara Walters Special; and NPR's Marketplace and Talk of the Nation. She has also been the subject of documentaries on CBS News' 48 Hours and The History Channel. She lives in New York City and in Belgrade Lakes, Maine, with her wife, Deedie, and her two sons, Zach and Sean.

“She’s Not There, the Running with Scissors of sex-change stories, brings irreverence and a merrily outrageous sense of humor to this potentially serious business.”
—Janet Maslin, New York Times


“Beautifully crafted, fearless, painfully honest, inspiring, and extremely witty. Jennifer Finney Boylan is an exquisite writer with a fascinating story, and this combination has resulted in one of the most remarkable, moving, and unforgettable memoirs in recent history.”
—Augusten Burroughs, author of Running with Scissors and Dry