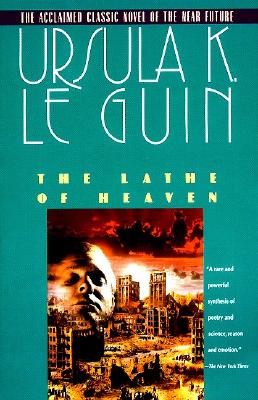 Ursula K. Le Guin has been in the vanguard of science fiction since the publication of her first novel in 1966. Her essays and criticism, short stories and novels, have won numerous literary prizes--including the Hugo, Nebula, World Fantasy, Tiptree, and National Book Awards--reverent critical acclaim, and a vast, devoted readership that reaches far beyond the genre. But out of all she has produced--all the brilliant speculations advanced and wondrous new worlds imagined--this is the work which perhaps best endures in the mind, the heart and the conscience.

"The Lathe of Heaven "is George Orr's story--a man who dreams things into being, for better or for worse. It is a dark vision and a warning--a fable of power uncontrolled and uncontrollable--a truly prescient and startling view of humanity, and the consequences of God-playing. It is, quite simply, a masterpiece.