Bourbon Empire: The Past and Future of America's Whiskey (Paperback) 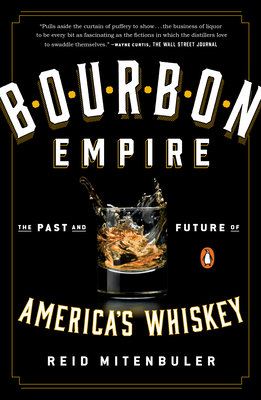 “Pulls aside the curtain of puffery to show . . . the business of liquor to be every bit as fascinating as the fictions in which the distillers love to swaddle themselves.” —Wayne Curtis, The Wall Street Journal

Walk into a well-stocked liquor store and you’ll see countless whiskey brands, each boasting an inspiring story of independence and heritage. And yet, more than 95% of the nation’s whiskey comes from a small handful of giant companies with links to organized crime, political controversy, and a colorful history that is far different than what appears on modern labels. In Bourbon Empire, Reid Mitenbuler shows how bourbon, America’s most iconic style of whiskey, and the industry surrounding it, really came to be—a saga of shrewd capitalism as well as dedicated craftsmanship.

Mitenbuler traces the big names—Jim Beam, Maker’s Mark, Evan Williams, and more—back to their origins, exploring bourbon’s founding myths and great successes against the backdrop of America’s economic history. Illusion is separated from reality in a tale reaching back to the Whiskey Rebellion of 1794, when the ideologies of Thomas Jefferson and Alexander Hamilton battled to define the soul of American business. That debate continues today, punctuated along the way by Prohibition-era bootleggers, the liquor-fueled origins of NASCAR, intense consolidation driven by savvy lobbying, and a Madison Avenue plot to release five thousand parrots—trained to screech the name of a popular brand—into the nation’s bars.

Today, the whiskey business takes a new turn as a nascent craft distilling movement offers the potential to revolutionize the industry once again. But, as Mitenbuler shows, many take advantage of this excitement while employing questionable business practices, either by masquerading whiskey made elsewhere as their own or by shortcutting the proven production standards that made many historic brands great to begin with.

A tale of innovation, success, downfall, and resurrection, Bourbon Empire is an exploration of the spirit in all its unique forms, creating an indelible portrait of both American whiskey and the people who make it.

Reid Mitenbuler has written about whiskey and drinking culture for the Atlantic, Slate, Saveur, Whisky Advocate, and other publications. He lives with his wife in Brooklyn, New York.

"Reid Mitenbuler pulls aside the curtain of puffery to show us the spirit’s history, as well as how the stuff is actually made, who controls the industry and where it might be headed.... [Shows] the business of liquor to be every bit as fascinating as the fictions in which the distillers love to swaddle themselves."—Wayne Curtis, Wall Street Journal

"An engaging and thorough exploration of the history of America's national booze."—Playboy

“An illuminating, well-paced narrative that will interest students and imbibers of the wee drap, American-style.”—Kirkus

“Mitenbuler’s prose is relaxed and mellow with a shot of wry; his entertaining, loose-limbed narrative revels in the colorful characters and droll hypocrisies of capitalism at its booziest.”—Publishers Weekly

"Abundant and even surprising detail is bundled with sharp writing that doesn’t hesitate to criticize.... This terrific account of the rich heritage behind a classic American beverage is recommended for those who enjoy reading histories of foodstuffs of all sorts."—Library Journal

“Bourbon Empire is a lively, rowdy tale of swindlers and smugglers, connoisseurs and craftsmen. Reid Mitenbuler is a talented storyteller whose wide-ranging curiosity takes us to Civil War battlefields and prison cells as well as cornfields and world-famous distilleries. Truly fascinating, and a must-read for whiskey lovers!”—Amy Stewart, author of The Drunken Botanist

“Bourbon Empire is more than just whiskey history. Mitenbuler demonstrates, with clear, witty and incisive prose, how the drink shaped, and was shaped by, the history of American capitalist society. It is a book that whiskey fans, historians and students of American business will enjoy, and learn much from.”—Clay Risen, staff editor, The New York Times and author of American Whiskey, Bourbon, and Rye

“A must have for every bourbon enthusiast from beginner to expert. A book that finally tells the true story of our beloved bourbon, putting in perspective its important role in American history. Bourbon Empire has it all, demystifying the good, the bad and the ugly.”—Sean Brock, Chef/Partner of McCrady’s and Husk

“In finding the facts behind some of bourbon’s most cherished fables, Mitenbuler has unearthed true tales that are even better than the tall tales. A fresh look at stories we thought we knew.”—Lew Bryson, managing editor, Whisky Advocate and author of Tasting Whiskey

“Reid manages to juggle his skepticism and enthusiasm in this carefully researched and lovingly written history of America's spirit. He peels back layer after layer of filigree, searching for the real story, which is as much the story of American business, politics, advertising, and immigration as it is the story of bourbon.”—Max Watman, author of Harvest and Chasing the White Dog