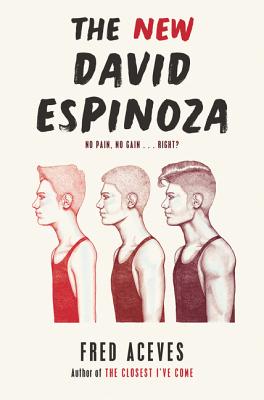 This own voices story from the acclaimed author of The Closest I’ve Come unflinchingly examines steroid abuse and male body dysmorphia. Perfect for fans of Jason Reynolds and Matt De La Peña.

David Espinoza is tired of being messed with. When a video of him getting knocked down by a bully’s slap goes viral at the end of junior year, David vows to use the summer to bulk up— do what it takes to become a man—and wow everyone when school starts again the fall.

Soon David is spending all his time and money at Iron Life, a nearby gym that’s full of bodybuilders. Frustrated with his slow progress, his life eventually becomes all about his muscle gains. As it says on the Iron Life wall, What does not kill me makes me stronger.

As David falls into the dark side of the bodybuilding world, pursuing his ideal body at all costs, he’ll have to grapple with the fact that it could actually cost him everything.

Fred Aceves was born in New York but spent most of his youth in Southern California and Tampa, Florida, where he lived in a poor, working class neighborhood like the one described in The Closest I’ve Come. At the age of 21 he started traveling around the world, living in Chicago, New York, the Czech Republic, France, Argentina, Bolivia, and Mexico. Among other jobs, he has worked as a delivery driver, server, cook, car salesman, freelance editor, and teacher of English as a second language.

“A much-needed novel about steroid addiction from the point of view of a high school boy who’s the victim of bullying.”
— School Library Journal (starred review)

“Stands out through its examination of toxic masculinity, body image, and the dangers of pursuing perfection.”
— Booklist

“An authentically told story that is both gripping and gut-wrenching.”
— Publishers Weekly